HomeFootballWorst Tackles And Fouls Ever in Football
LIGHT
Worst Tackles And Fouls Ever in Football With League football about to return, there seems to be a new debate over exactly what constitutes a foul – particularly in the penalty area, naturally. While some fans and observers feel strongly that attacking players deserve more protection from hard-hitting defenders, plenty of others will argue that football is a “contact sport” and that […]

Worst Tackles And Fouls Ever in Football

Worst Tackles And Fouls Ever in Football

With League football about to return, there seems to be a new debate over exactly what constitutes a foul – particularly in the penalty area, naturally.

While some fans and observers feel strongly that attacking players deserve more protection from hard-hitting defenders, plenty of others will argue that football is a “contact sport” and that things were better in the 1970’s and 1980’s when the tackle from behind was still allowed and players could be sent flying.

Graeme Souness on Gheorghe Rotariu (1988)
One of the Scot’s most x-rated tackles took place during Rangers’ European Cup clash with Steaua Bucharest. “Souness nearly killed him – it was horrific, one of the worst tackles I have ever seen,” said Gheorghe Popescu, the Romanian who was part of Steaua’s side that night.
Punishment: none

Harald Schumacher on Patrick Battiston (1982)
The West German goalkeeper’s collision with Battison, the French defender, remains one of the worst fouls in World Cup history. The collision left Battison unconscious, while he also lost three teeth.
Punishment: none, the referee awarded Germany a free-kick.

Martin Taylor on Eduardo (2008)
Birmingham City’s Martin Taylor received death threats after his tackle on Eduardo in a Premier League game which left the latter with horrific injuries. Taylor always maintained that the tackle was not malicious, and said he has received plenty of support over the last year.
Punishment: Red card 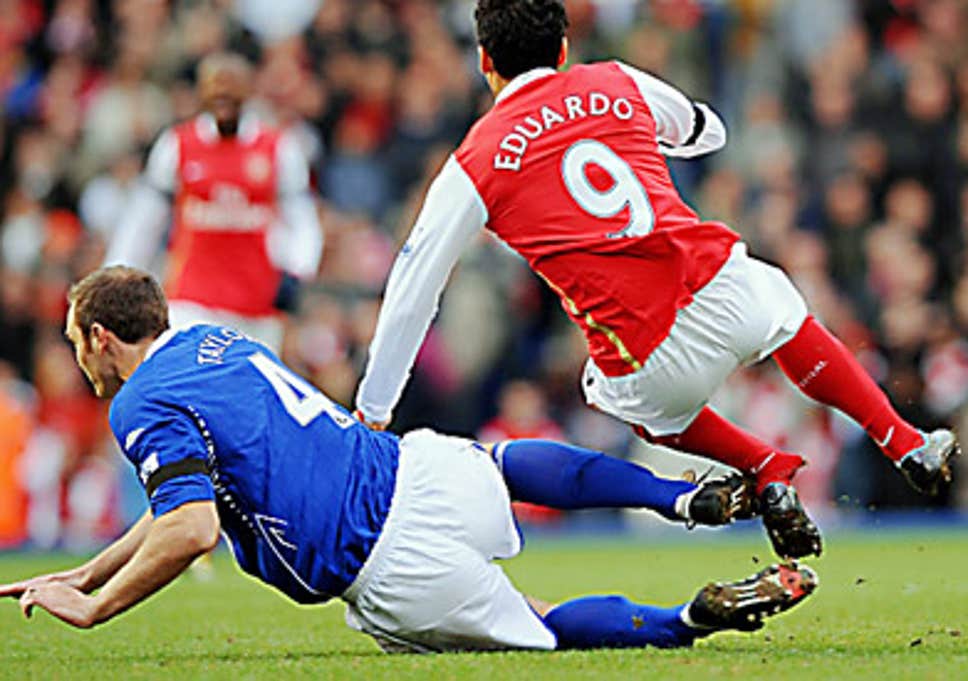 Andoni Goikoetxea on Maradona (1983)
This studs’ up challenge from the Athletic Bilbao defender on Maradona left the Argentinian with a severely damaged ankle.
Punishment: none, though Goikoetxea was handed the nickname the ‘Butcher of Bilbao’.

Paul Gascoigne on Gary Charles (1991)
The wild tackle that changed the maestro midfielder’s career. The lunge, during the FA Cup final, ruptured the Tottenham player’s knee ligaments as Charles hobbled away.
Punishment: none, though should have been straight red.

Roy Keane on Alf-Inge Haaland (2001)
The infamous tackle that saw Haaland carried off during the match between Manchester United and rivals City at Old Trafford. Keane said in his autobiography that he had sought out Haaland ever since the player had allegedly stood over him when the United captain injured his cruciate ligaments in a previous clash during the 1997-1998 season.
Punisment: an undeniable red card, undisputed by Keane.

Lee Bowyer on Gerardo (2003)
“An act of serious assault,” is how Uefa described the Leeds midfielder’s stamp on Malaga’s Gerardo. Bowyer had made contact with his opponent’s head during a Uefa Cup defeat and had already been book for fouling Gerardo moments earlier.
Punishment: officials missed the incident, but Bowyer was later handed six-match ban by Uefa.

Ben Thatcher on Mendes (2006)
Ben Thatcher earned an instant entry into this category thanks to this clash with Portsmouth midfielder Pedro Mendes, after his elbow intentionally connected with the latter’s face. Mendes required oxygen pitchside
Punishment: Eight-match ban (with further 15-match suspension, suspended for 24 months).

Ryan Shawcross on Aaron Ramsey (2010)
Stoke defender Shawcross inflicted a double fracture on Ramsey, a tackle which left the Arsenal midfielder out of action for a year
Punishment: red card, suspended for three matches.

Nigel De Jong on Xabi Alonso (2010)
“It was one of the worst tackles I have ever suffered,” said Alonso following a bad-tempered World Cup final between Holland and Spain. De Jong later claimed he had been “treated me like a war criminal” in the weeks that followed.
Punihsment: yellow card.

Saul and Carvajal Interview after the Derby game